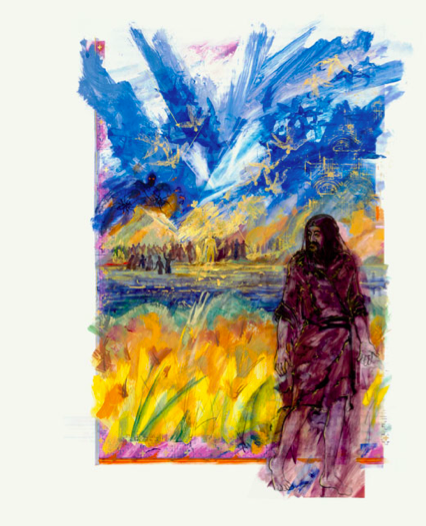 As the people were filled with expectation, and all were questioning in their hearts concerning John, whether he might be the Messiah, John answered all of them by saying, ‘I baptize you with water; but one who is more powerful than I is coming; I am not worthy to untie the thong of his sandals. He will baptize you with the Holy Spirit and fire. Luke 3:15-16, NRSV

On Sunday, January 13, the Catholic and Revised Common lectionaries celebrated the Baptism of our Lord. It marks the beginning of Jesus’ public ministry, and establishes from the beginning Jesus’ relationship with the Father and the Spirit.

Fr. Michael Patella, OSB, Chair of the “Committee on Illuminations and the Text” for The Saint John’s Bible, also wrote the volume on Luke for the New Collegeville Bible (Collegeville, MN: Liturgical Press, 2005). He notes that while Jesus’ baptism is presented to us as a momentus occasion, in Luke’s account it passes unnoticed to those in the crowd and even to John. He writes,

“Jesus is baptized as one among the crowd, the voice from heaven is directed only to him, and it is understood that the others do not hear it. Later, when the Baptist sends messengers to Jesus (7:18-23), there is no indication of his being aware of having baptized Jesus.” (p. 26)

John, who has lived faithfully his calling to prepare the way of the Lord (to the point of living in the wilderness as an ascetic), is exercising a public ministry of baptism to a people who need repentance. Yet among the crowd is Jesus, the one about whom he is speaking but is not now given to recognize. John does not yet realize it, but the one whom he serves is the one who will bring him salvation. It is John who will be changed more than the one to whom John ministers.

Those who minister in our day often remark that they receive more than they give. In the faces of the homeless, destitute, abused, and grieved they come to find in a profound way the love of Christ. They discover that when Jesus spoke of serving him through the “least of these”, he was not just speaking metaphorically. In all of our encounters with others, whether the person in front of us in line who is taking too long to order, or an unshaven homeless man leaning on the side of a gas station, we must remember that Christ is present within them.

Take a moment to look at the illumination, and ask yourself what God wants you to see. In our lives the presence of Christ is not always visible as a radiant gold glow, as in the depiction of the crowd in this illumination. Perhaps, though, we can remember this illumination as we serve others. Ponder the illumination of John the Baptist…does he seem incomplete, lacking, or weak? Perhaps we can use this as a mental image, so that when we minister to others, we remember that we too need Christ’s fullness.

Jesus’ baptism marks the beginning of his public ministry, the years of offering teaching, service, and love to all of God’s people. In our desire to follow Jesus, let us remember to look closely at his example, knowing that in serving others we ourselves will be drawn closer and closer to the one who is love.

© Baptism of Jesus, Donald Jackson, 2002 The Saint John’s Bible, Order of Saint Benedict, Collegeville, Minnesota. Used by permission. All rights reserved. Scripture quotations are from the New Revised Standard Version of the Bible, Catholic Edition, © 1993, 1989 National Council of the Churches of Christ in the United States of America. Used by permission. All rights reserved.

Each week during Lent, two video reflections will be shared: one from a student at the College of Saint Benedict / Saint John’s University, and one from a faculty member or professional.

“Repent and believe the good news”

Dr. Jeffrey Kaster
Director of Youth in Theology and Ministry and faculty member at College of St. Benedict / St. John’s University and Saint John’s School of Theology•Seminary in Collegeville, MN

Alyssa Brown
Senior at the College of Saint Benedict in St. Joseph, MN; double majoring in Peace Studies and Theology.

Dr. Donald P. Richmond
The Very Rev. Dr. Donald P. Richmond, a widely published author and graduate of both the Maryvale and Robert E. Webber Institutes, is a Priest-Oblate with the Order of Saint Benedict and Reformed Episcopal Church. He reflects on the discipleship practice of “Worshiper” and the Illumination “Baptism of Jesus” from Mark 1:4-11

Illuminating Justice is a series of audio reflections connecting the themes of Catholic Social Teachings with the Illuminations of The Saint John’s Bible.