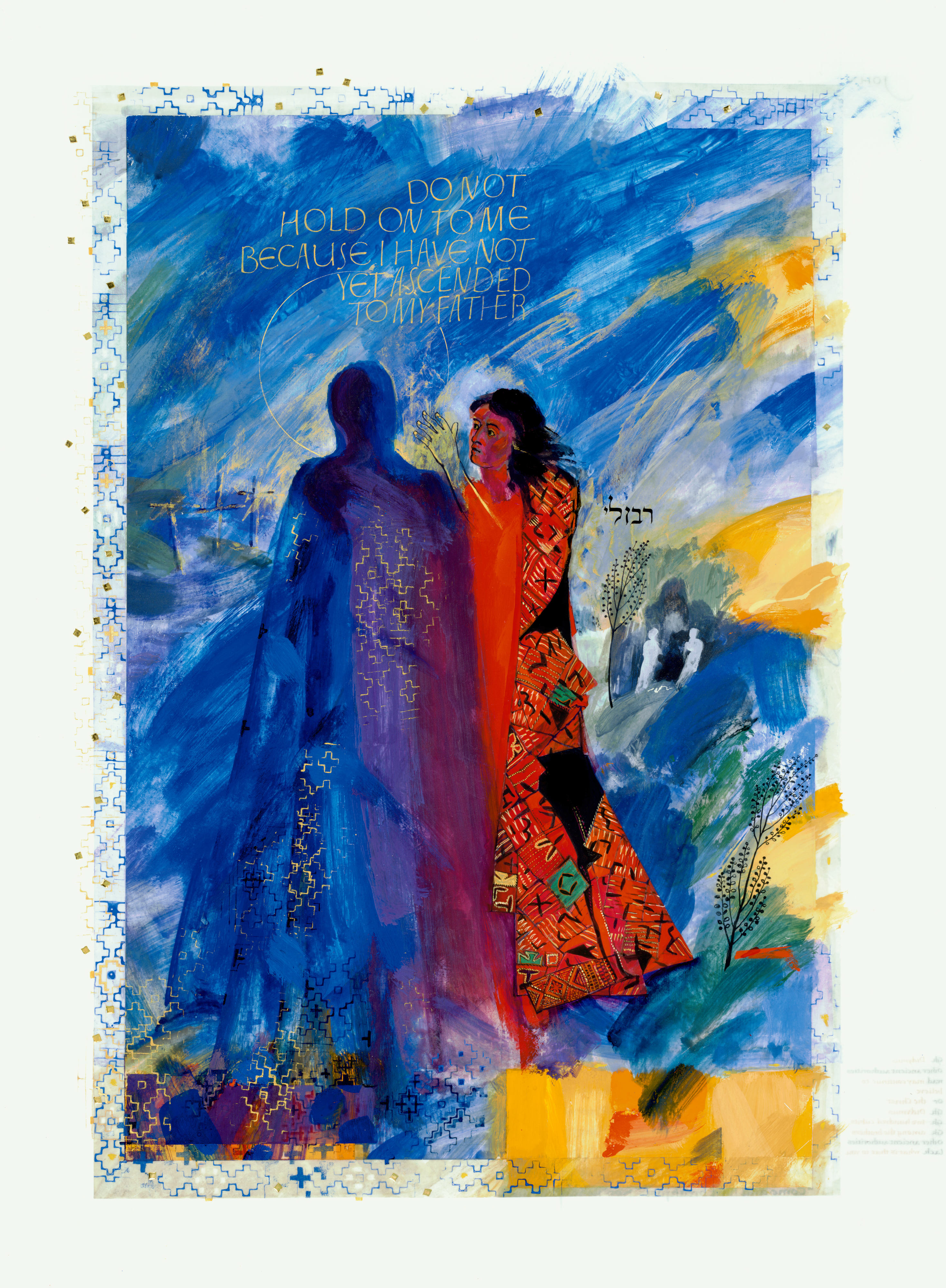 As you take a few minutes to look at the illumination, what is the first thing that catches your attention? Is it the contrast of the light and dark colors between Jesus and Mary Magdalene?  Is it the gold lettering? Maybe it is the crosses and the tomb in the background of the illumination.

Easter is a season of movement and layers of divine revelation, which are reflected in this Resurrection illumination of John 20:1-23. This illumination tells the story of the journey from Good Friday to Easter Sunday. Starting on the left side of the illumination with the three crosses, our eye then travels to the empty tomb. There has been a physical movement of Jesus’ body from the cross to the tomb and from the tomb to the resurrection.

Taking a second look at this illumination, we now focus on the movement between Jesus and Mary Magdalene, who arrives when it is early in the morning and it is still dark. She does not recognize Jesus. She is caught up in her own sadness that Jesus, her Rabbi and Lord is not in the tomb. Jesus addresses Mary Magdalene and asks her why she is weeping. Her response is one of distress because she is frightened. She does not realize that she is talking to Jesus; she thinks that she is talking to the gardener.  Only when Jesus calls her by name does she realizes that she is talking to the Risen Christ. Recognizing him as her teacher, she responds immediately, saying, “Rabbouni” (John 20:16). This is depicted to the right of her shoulder with the three Aramaic characters, translated to mean “my Rabbi.”

Imagining Jesus calling our name moves us deeper into the scene of the illumination, allowing different aspects to catch our eye. The hues that lead us to the image of Jesus are dark; they begin to lighten as our eye starts moving to Mary Magdalene. She is portrayed in red. Her arm is pronounced in gold as she reaches for Jesus and there is gold and light under her feet. When Mary Magdalene recognizes Jesus’ presence and the light he exudes, the gold in Jesus’ garments stands out and divine revelation starts to take over the story.

Next Jesus says to Mary Magdalene, “Don’t hold onto me I have not ascended to my Father. Go and tell my brothers that I am going to ascend to my Father” (John 20:17). Mary Magdalene is commissioned to go. According to John’s Gospel, Mary Magdalene does not walk. She runs to tell Peter and the others what she has seen and what she has been told. During this Easter season may we pay attention to the movements from darkness to light, from death to life in our own lives. And may we run with zeal to share our own divine revelation of the Risen Christ.

Tracy Dereszynski, OblSB is the Director of Adult and Family Ministry at St. Francis Borgia Church in Cedarburg, Wisconsin. She is an oblate of Saint John’s Abbey in Collegeville, Minnesota.